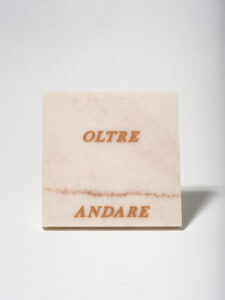 Alphabetical writing, the one inaugurated in the Greek world, which has come down to us without major variations, has determined the birth of Western culture and its logical-rational specifications.

From the moment in which the sign, the first symbolic relationship with the divinity, is transfigured into an abstract sign which, freed from the symbolic signifier, imposes on thought the imaginative realisation of the named meaning (analogon), in the word composed of insignificant letters in their singularity, the rational logical model is imposed in the West.

Its appearance determines the exit from prehistory, from the world of myth, from the sign as a divine work to inaugurate a new adventure in thought.

In every single letter there remains the faint trace of an origin buried in the depths of time, an ancestral magic, the breath of a living god who revolutionised the world.

This website uses cookies to improve your experience while you navigate through the website. Out of these cookies, the cookies that are categorized as necessary are stored on your browser as they are essential for the working of basic functionalities of the website. We also use third-party cookies that help us analyze and understand how you use this website. These cookies will be stored in your browser only with your consent. You also have the option to opt-out of these cookies. But opting out of some of these cookies may have an effect on your browsing experience.
Necessary Sempre abilitato
I cookie necessari sono assolutamente essenziali per il corretto funzionamento del sito Web. Questa categoria include solo i cookie che garantiscono funzionalità di base e caratteristiche di sicurezza del sito Web. Questi cookie non memorizzano alcuna informazione personale.
ACCETTA E SALVA